The Genius of Bugs 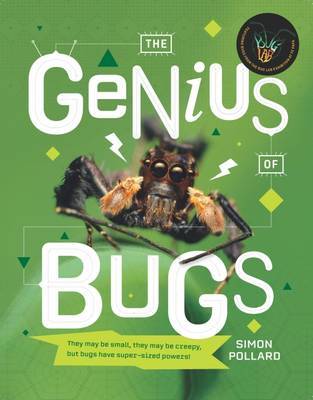 The Genius of Bugs

The Genius of Bugs is a new, fresh take on the world of bugs, inspired by the blockbuster science exhibition Bug Lab, brought to Wellington this summer by Te Papa and Weta Workshop.

Illustrated with up-close, dramatic bug photography throughout, The Genius of Bugs is filled with bug tales, facts and figures that showcase bug ingenuity and reveal astounding bug behaviour. Featuring New Zealand and international examples, children will be entranced by these inspiring bugs and remarkable recent discoveries about their genius. Meet a roll call of some of the world's most incredible bugs - from the sneaky portia spider to the killer brain-surgeon jewel wasp, to New Zealand's king of the creepies, the weta.

Simon Pollard is a successful children's book author, insect expert and natural history writer. Currently Adjunct Professor of Science Communication at the University of Canterbury, Simon is the author of the award-winning I Am a Spider (Reed, 2004) and I Am an Insect (Reed, 2002). He is a frequent contributor to Natural History (US), BBC Wildlife (UK), New Zealand Geographic and Nature Australia magazines and has worked as an advisor and script writer for many natural history documentaries, including The Hunt (BBC, 2015) and Planet Earth (BBC, 2006). His book Dear Alison (Penguin, 2009) won the 2010 Children's Choice Award for non-fiction at the New Zealand Post Children's Book Awards and the 2010 LIANZA Elsie Locke Award, Non-fiction Book of the Year.